UFO sighting – what was that?

On September 15, 2012 while sitting on the deck in Osoyoos with Lorin and our friend Peter enjoying a cold beer on a hot evening, I looked at the sky through binoculars and saw a very fast-moving bright dot that I thought was a satellite. It was unusual because of its speed but also because it weaved its way through the night sky as if going around things.  I pointed it out to Lorin and Peter but they couldn’t find it in the sky. They said there is no way a satellite can maneuver like that so it must be a UFO.

Since returning home in Coquitlam, I have found online that there were many sightings around the world and some people had even filmed something like it in the daytime in Australia.  Cue the theramine: it turns out there has been a spike in sightings in the last 3 months with more sightings in that period than there have been in decades.

Well, it doesn’t mean it was a alien ship – it just means it was unidentified. Could’ve been a weather balloon, military test plane, or any of the standard alternatives – and why not?

Over 20 years ago while camping near Harrison Lake, BC, Lorin and his friends saw exactly the same thing that I saw last weekend. They all said to each other “did you see something strange in the sky?”.  They all remember the night they saw a UFO.

There are so many people out there searching for information about this family lineage for their family tree or to obtain Metis status.  Some of us are complete amateurs and do it for fun, but others really have a knack and do a very professional job of finding information and writing about it.

This blog about the Livingston Family History, for example, is amazing.  They are another lineage from Antoine and Magdeleine. The writer, Deborah, is thorough and detailed.  Please visit her blog (link goes directly to an entry about Antoine and Magdeleine): http://livingstonaliveandwell.blogspot.ca/2012_07_01_archive.html

Please continue to provide me with scans of what you find so I can make them available to other seekers.

Look at the displays in this great old museum in Pembina North Dakota.  The museum collection depicts early life for pioneers, metis, voyageur as well as those who surveyed the borders. 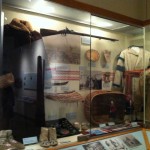 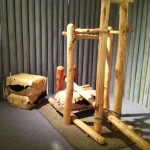 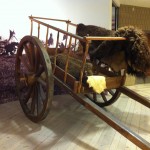 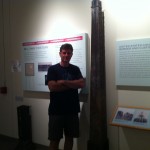 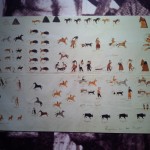 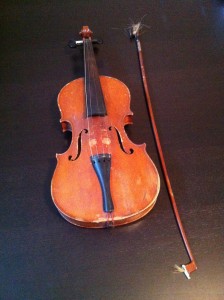 I found this battered old fiddle (violin) in the barn on the farm. Uncle Sylvain said it was from Grandma’s family but Lorin’s Mom is sure it was her Grandpa’s.

Lorin is a luthier (as a hobby) so he’ll restore it for display as it may not be able to make a decent sound. I’ll send the bow out to be redone. Needs lots of TLC.

If only this fiddle could tell us stories of where it was played and by whom – wouldn’t that be something. Was it a fiddle playing jigs and reels or was it used as a violin for classical pieces.  Hmmmm.

Yippee – Lorin has begun work taking out the wall between the kitchen and dining room.  Our kitchen is large but our dining room is quite narrow so now it will “feel” larger just because our view won’t stop at a wall.  The instant he bashed through it we realized it will be even better than that as there is another large window in the kitchen that we can now see from the dining room.  Amazing to have a such a wide view of our beautiful yard – very exciting.

The plan includes lower cabinets and countertop along the outside wall and where the old wall was, plus task lighting above so we don’t have to work in our shadow when preparing food there.

And since the windows are ugly original aluminum we’ll replace them too, and of course change the paint colour.

One thing always leads to another so Lorin wants to finally put in a good quality kitchen floor so were shopping for that too.  We’re looking for cabinets in the construction recycling shops but we’ll get new countertops custom installed through the whole kitchen when complete.

Sure is nice to have a handy husband.

The sun is shining and I was in the mood to tackle a small garden project this morning. So, I got my garden gloves and clippers and stepped out into fresh air and sunshine.

The small project was to clip some herb plants as the new growth will begin soon.  Two and a half hours later I was exhausted from raking, digging, pruning, and pulling out stuff. Now the whole herb garden and pond look fantastic, my piles of leaves from fall are merged into fewer but larger piles, and half of my large perennial garden is cleared of last year’s dieback to expose all the new growth coming up from the irises, grasses, and more.

Hopefully we’ll get some good weather this coming weekend so I can clean up the veg garden and get in some seeds for spinach and other things that like the cold.

I’ve got the bug – I’m looking forward to spring!

This is the oldest of the three remaining river lots (@ 100 acres) which qualifies for the 125 Year Family Farm designation in Manitoba.

The first Jutras to purchase this land was Moise Jutras and his wife Julie Houle in 1888:

Tony and Yvonne have since passed away and now their children and grandchildren have the farm.

The town of St. Pie used to be located here on the Red River and the parish church on the next property. The main road used to lead directly to this spot but was decommissioned and relocated in 1901.

This area was originally a Metis village. The first owner of this lot was a Metis man named Samuel H. Phippen. He received it as script land grant in 1882 and sold it within two months. His sister owned the next lot (script grant) so they likely grew up here and were granted the land they lived on.

Uncle Sylvain told us that the older generations in town remember walking along the shore and finding foundations for the old Metis homes. These must have been destroyed when the land was cleared for farming.

Lorin (land surveyor) paced out the land as it will likely need to be marked out when it receives the 125 Year Family Farm designation.  A plaque will be permanently installed and the government will have a formal ceremony on site.  I hope to have this scheduled to take place during our visit in the summer of 2012.