For the first election that happened after I was old enough to vote (Glen and I were both eligible at that time) Mom and Dad walk us down to the polling station at our old elementary school and told us who to vote for. The weeks leading up to the election they never encouraged us to learn about the candidates or their parties as they had their minds made up who to vote for and assumed that we’d follow their lead.

After marking my ballot and joining the family for the walk home, Glen and I fell back to talk secretly as we were both snickering and knew we had something to tell. Well, once we opened our ballot and saw how many choices there were and the names of the parties “Rhinocerous Party”, “Friends of Beer Party” and maybe even the “Marajuana Party” — there was no way we were voting with our parents!!  Voting became fun all of a sudden!  I don’t remember who we each voted for but we selected from the likes of those mentioned above.  Of course we told our parents we voted as they instructed to keep the peace.

We then made the effort to learn a bit about each of the alternative parties and found that some even had legitimate concerns and an interesting platform.  We became engaged in the process and, in the years since, I have looked forward to learning about candidates and parties.

I don’t wear party stripes and often vote differently than I expected going into the election.  Sometimes I’ve voted in hopes to remove someone but usually feel like I’ve wasted my vote when it is all over. For many years I was able to vote for who I wanted but voted for them as individuals – I wanted them representing me – not necessarily their parties. And sometimes I have voted for a party as was more concerned for the larger picture than the local one.  Those have also felt like wasted votes at times. 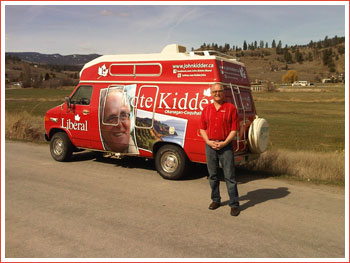 My friend John Kidder is running as a Liberal candidate in the BC riding of Okanagan-Coquihalla.  He’s a fine man and in my view will make a great MP.  He has all the qualities that we expect from our representatives – and more. I’m not a card-carrying Liberal but I am sure hoping that John wins the seat.  So many politicians have let us down over the years but he is upstanding and will do a great job for the people of the Okanagan-Coquihalla.  Please check out his website at johnkidder.ca

So, my message is that it is important for young Canadians to vote. Learn about your candidates and vote.  Even if you feel you don’t know the candidates, get out and vote as it will make you realize how important and significant your action is and it will encourage you to have more knowledge of the issues, candidates and party platforms the next time you have the opportunity to vote.  I believe that most voters decide who to vote for based on very few factors.