Well, I’ve learned a lesson about genealogy – track your sources and consider the details more carefully.  I have been enjoying the endless threads of stories, theories about some very interesting ancestors of my husband’s – not as a genealogist but as someone who loves the stories.  I find myself absorbed for hours as one story leads into another and a question someone posts finds its way to many others who contribute to the answer – WOW – what a community!  I have to hand it to you all for keeping the history of families and nation-building alive through your genealogy and history research.

After writing about my findings I’ve been asked for verification of the info I’ve repeated on my blog.  From now on I will provide links etc to the info so that those who are conducting serious searches can get to the source quickly.  I should be able to find links in my browser history so I’ll post them in a few days.

Keep up the good work everyone.

Amazing how one little idea can turn into hours of obsession!

I started by looking for the name of the book that the excerpt about Madeleine Lestard St. Onge McTavish and Antoine Lafreniere originated in.  I found out the book is called Pionniers de Montagne Pembina by Odile Martel. In the process I learned more about how their son Olivier (and his son) were amongst a few original settlers in Pembina Mountains and founded the town of Saint-Leon. Antoine, Madeleine, Ovide and the others followed and the town grew.  Antoine gave land to build the church and Olivier developed his second lot into village lots.

So, where did they come from?  I had come across this info before but spent more time on yet yesterday.  The were voyageurs who had served at the British military post in Drummond which was closed down (land returned to USA) and the base was moved to Penetenguishene, Ontario.

Many, like Antoine, had married  local native or metis women on Drummond Island.  Madeleine was metis (Scottish – McTavish) and described as “native woman with red streaks in her hair”. She spoke Cree, Michif, English and French.  Her grandmother Madeleine Ouiouiskoin was Ojibwa from the Outowa Nation. I didn’t find out much about her other than she was baptized at 30 years old – the same day she married Jacques Vasseur of Montreal.  There is much speculation about Madeleine McTavish’s father.  One area of research shows that her parents and two siblings died in a boating accident and she was adopted by an aunt and didn’t learn about this until she was an adult – the time she began using the name McTavish.  The other is that her mother had her with a McTavish man before marrying the man she would have more children with.  Either way, it is certain that she was metis and so were her children.

So, they moved with the base and settled in the township of Tiny in Penetenguishene, Simcoe County, Ontario where they had been given land grants after their participation in the war at Drummond Island. Approximately 160 voyageurs and their families migrated to Tiny.

Then a generation or two later, many moved to St-Leon and throughout the Red River area.  Looking at the names on land grants in Manitoba from late 1800s you see the same family names as were in Tiny and Drummond Island. The voyageur spirit must have given them the ability to uproot their families from a comfortable settled town in Ontario to once again pioneer a land and establish a new community of metis and voyageurs. Madeleine was a grandparent when she migrated to Manitoba.

They are a very interesting family and I really enjoy doing this research. I’m learning about Canadian history, the metis people and it all leads to Canada today and the many strong metis communities that still exists across the country.  I learned yesterday that Simcoe has a very strong metis community and traditions dating back to the early settlers from Drummond Island. 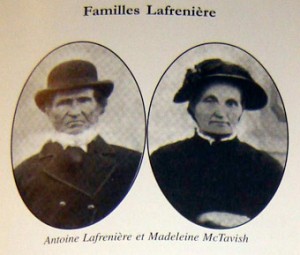 I’m currently obsessively researching my husband’s ancestors. It is fascinating to learn about the Metis culture in Acadia, Nova Scotia and later in the Red River in Manitoba.  According to the official genealogy provided by St. Boniface Society, Lorin is a direct matrilineal decendant of a Mi’Kmaq woman named Marie Aubois at the time of first contact in Canada.  He also has an Ojibway Metis later in his genealogy as his family were pioneers in Manitoba. In this photo are Antoine Lafreniere, a voyageur (Metis) with the North West Company and Madeleine Letard / St. Onge / McTavish.  Her grandmother was Ojibwe.

Lorin’s family still has hundreds of acres of farmland in the fertile Red River valley.  I visited the prairies a few years ago for the first time – that prairie sky brings a tear of wonderment to your eyes – the flat lands go for ever with bright coloured fields.  The largest Tornado in the history of Canada hit while we were there.  It was an amazing experience even for a seasoned traveller like me.